by BartStar
Nothing much to say about this thing but that it squirts plastic and can print for hours and hours.


Prusa I2 currently under construction. I hope to have it finished by December. I have a Rambo controller
and heat bed on order. I’m really looking forward to using this printer. I know its going to produce some
great prints.

by lowfat
My only functioning printer. E3D V6 w/ amplified PT100. 300x200mm bed. MKS SBase 1.3. DIY Titan extruder. 0.9 degree X and Y steppers. Enclosure is a temperature controlled and auto on/off heated enclosure. Although even w/ polycarbonate I never found I needed to turn the heaters on. So I've removed all the wiring that connected to the printer.

I'm currently building a reinforced frame for this printer and will be converting it to a single Z motor. Also have a Wilson 2 95% finished (also single Z motor). Just waiting for the closed loop belts to arrive (been 2 months already). 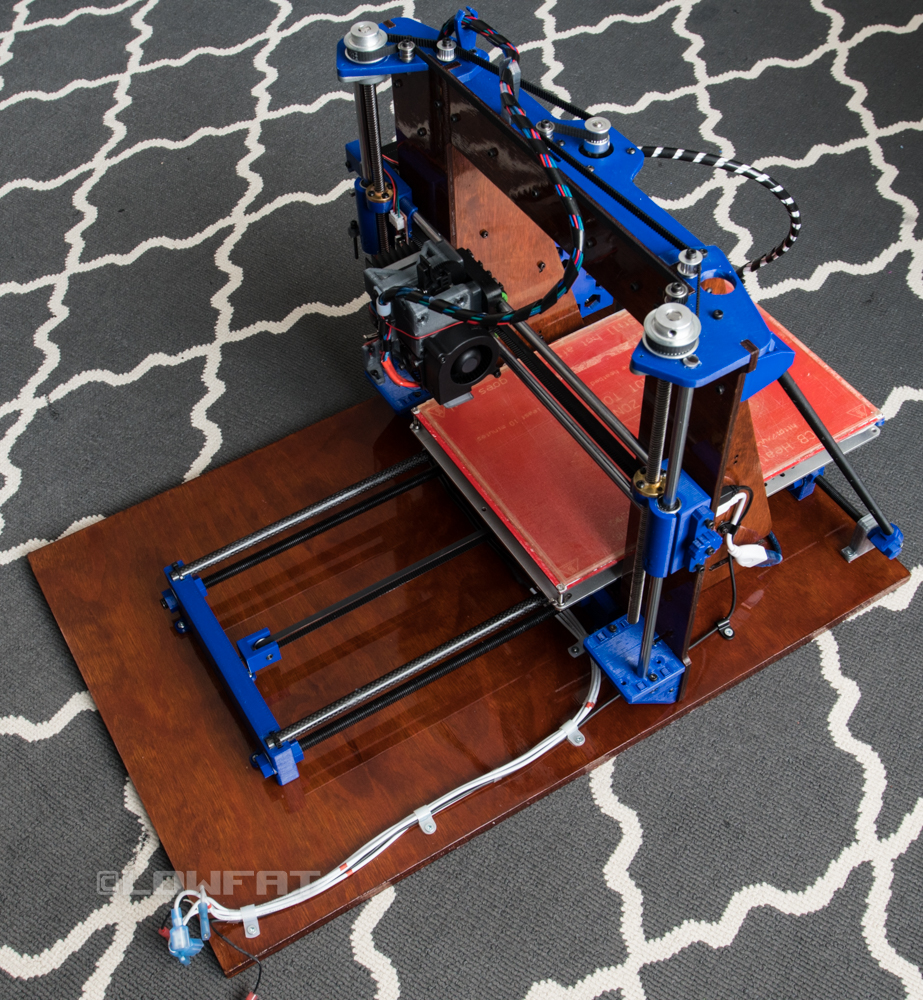 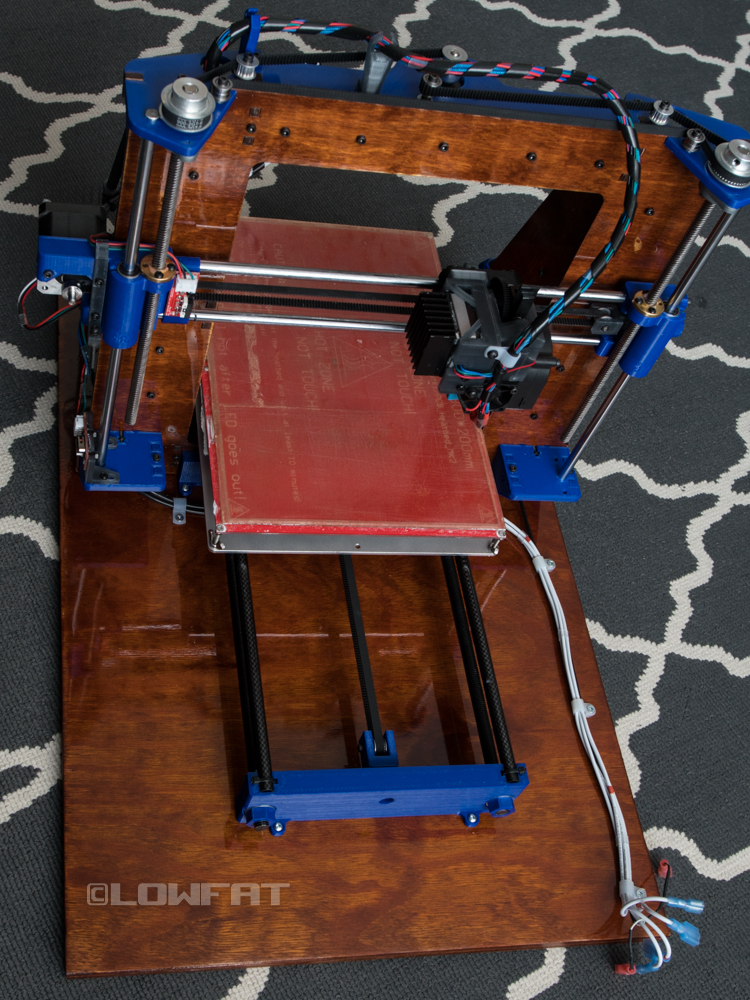 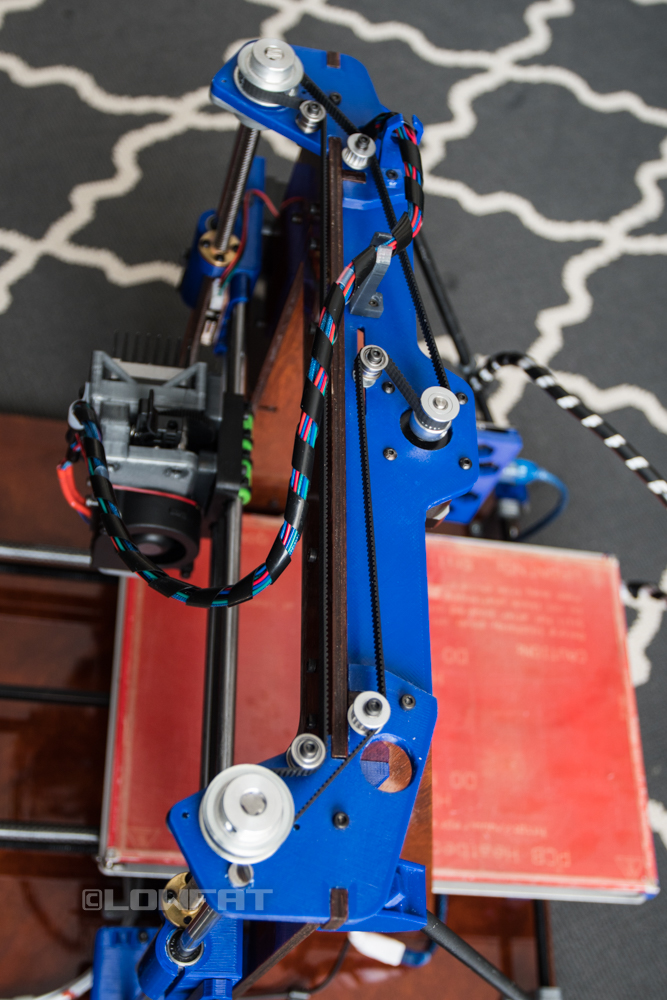 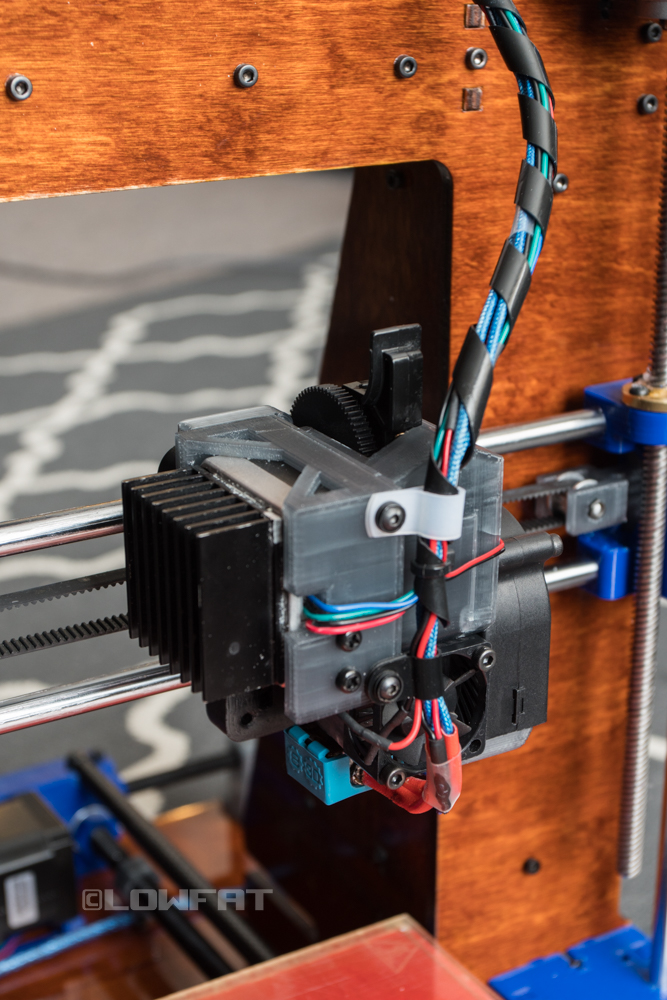 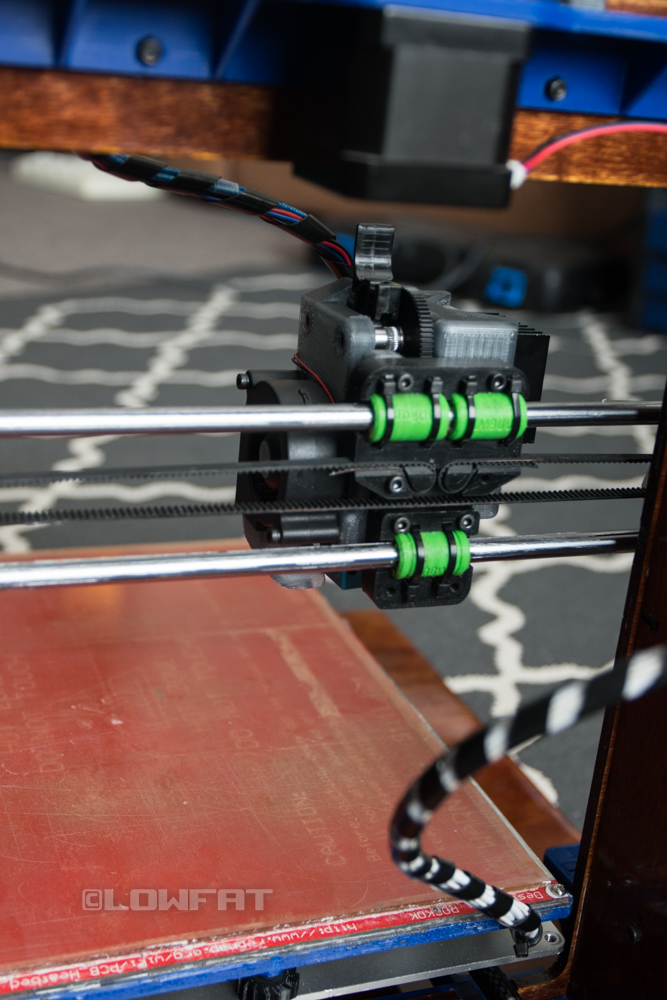 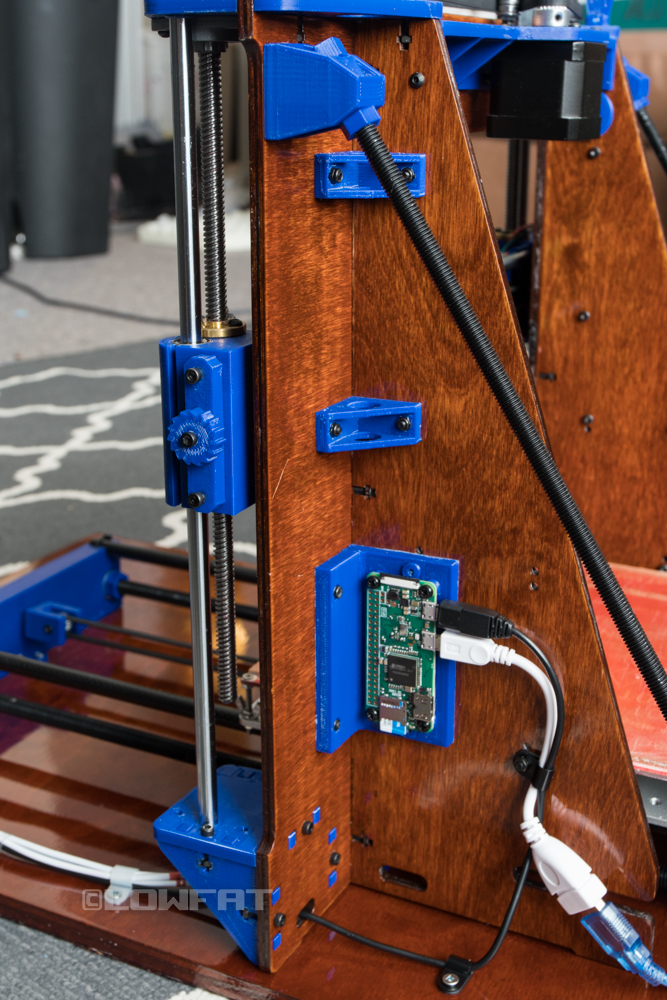 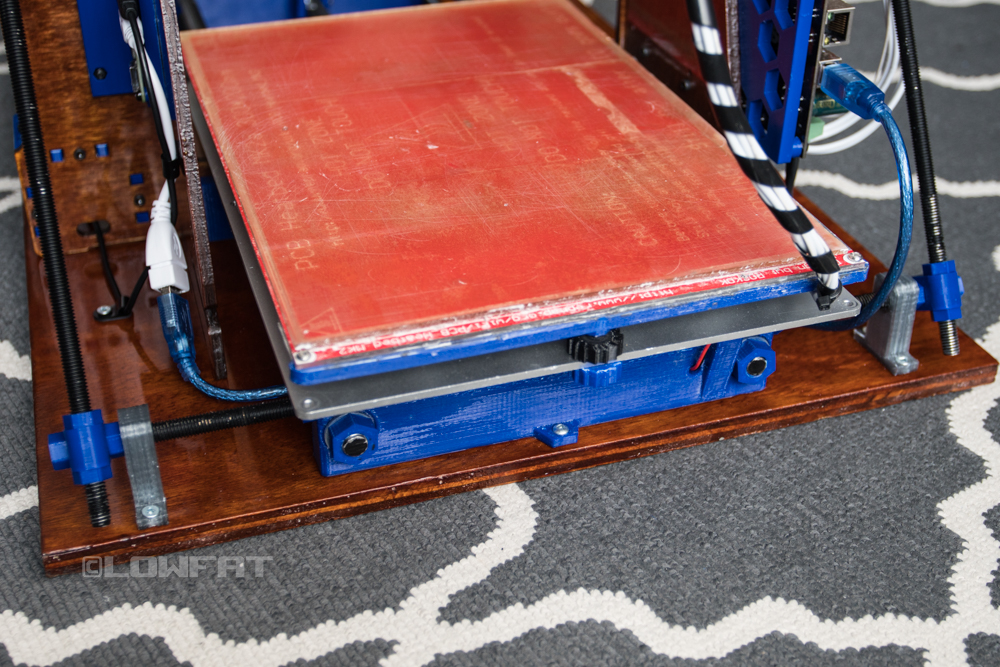 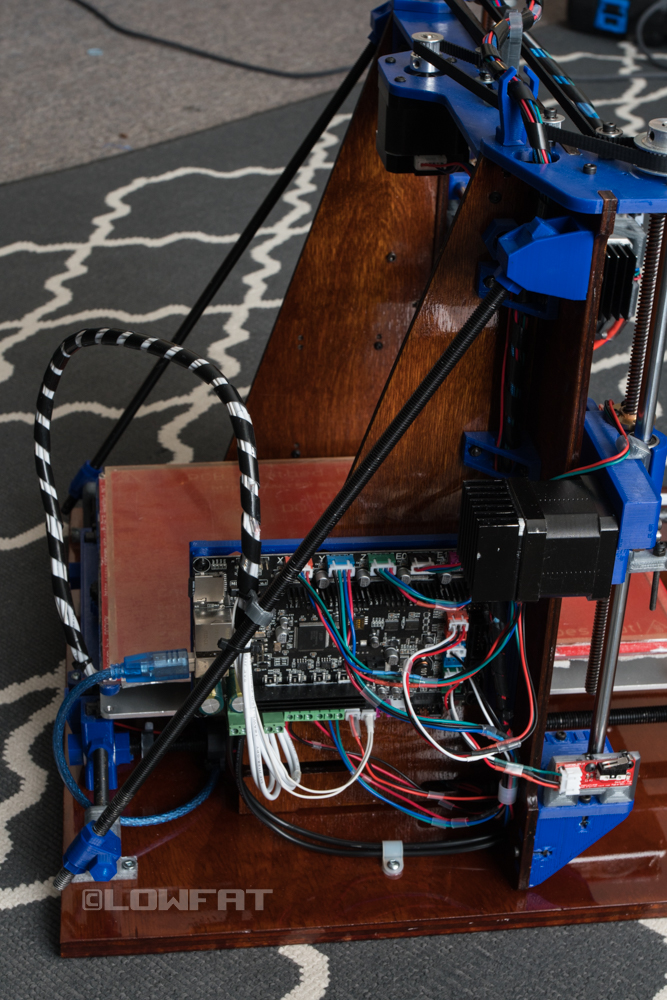 That's awesome! Could you share some info about those sliders?

by NestorPomar
This is my prusa frankeinstein, each piece from different supplier and I did plenty of improvements during the four years I am working on it.
Now it runs a E3d v6 hot end with a titan extruder and an Ir Z probe.
The next improvement is a multimaterial hotend, it's a mix between a Chinese hotend and original E3d chimera pieces. The approach will be the same of the make multimaterial solution but not a more compact shape... We will see if it will work.

by taranis
Thats my setup. Lovly Anycubic Kossel & my baby: A bq prusa i3 Hephestos with "some" modifications

by MarkHobbs
I have a self build P3Steel XL running on a DuetWifi with a titan extruder, e3D hot endand a BLTouch like probe for bed levelling. It sits in an insulated heat chamber that’ll reach 50c from only the Heated bed at 115c.

This Christmas I plan on converting this Makerbot 5th Gen replicator into a useful CoreXY machine replacing the electronics with a DuetWifi and new hot end/extruder.

And last but not least, I am waiting on a Kodama Obsidian Deluxe in Black that I kickstarted :p

The day my LulzBot Mini was delivered!
Have since invested in an acrylic case and a Flexystruder to print with flexible filament. Have also added a Raspberry Pi to use Octoprint and LED lighting to make it much easier to see the print bed and to allow for a future remote camera upgrade.

by alexandre.cliche
My printer is an Alunar M505. Same as ANET A8. Most peoples would say that all the upgrades Ive made doesn't worth it and that I should just have bought a CR-10. But I very like my printer and I've learn so much in the process of pimping it. It's linked with Octoprint via a raspberry pi 3.

Thanks to Tom and his excellent guides!!!!!!
Currently working on a New design. ... from scratch
All times are UTC+02:00
Page 4 of 6
Powered by phpBB® Forum Software © phpBB Limited
https://www.phpbb.com/