Anything goes! Cheap or expensive, FDM or SLA, DIY or Commercial.
Post Reply
6 posts • Page 1 of 1

In 2013, a fellow I was doing development work for gave me a used 3D printer so I could do some prototyping. I knew nothing and don’t know much yet about 3D printing, but with the machine I was able to get prints of sufficient quality for proof of concept. Other than the build appeared to be of low quality, I knew nothing of the printer.

Jump forward about 4 years of the printer not being used, and I had a personal project I wanted to use it for. I couldn’t get the thing to work. After research and dabbling, I found that the printer was a Sells Mendel and firmware was probably corrupted. I learned enough to use Marlin to get the thing kind of working. Unfortunately, the PLA (loose coil, not on a spool) that was sent with the printer had become brittle from inadequate storage (I’m a real noob), but I had ordered a spool of ABS which seems to be okay. Trying to get the printer calibrated to print ABS has been a real PITA. Then one of the 2 power supplies died and the two that I have from really old PCs don’t have sufficient amperage. I have a hosed up Alienware R3 that I will remove the PS from when I get time (don’t have any specs, but it should be sufficient). I have given up on it for now, as I have MK3 kit coming at the end of the month.

I do want to rehab and upgrade the Sells in the future with a better X carriage with fans and a better hot end. The thing desperately needs rewiring and a better heated bed. If anybody out there has tackled such an endeavor, I would love to pick your brains. I have run across the Open X/Y project and that is the way I may go. 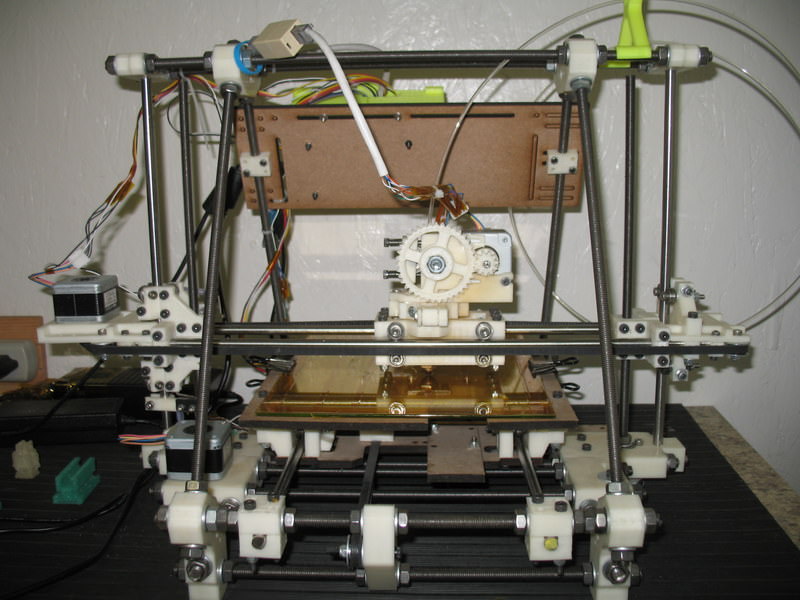 Oh well, given the lack of response and that I am not much of a fan of the threaded rod frame, I have started considering what else I could do with the printer. Being a woodworker, the Raise D3 is interesting. Or maybe Tom's Dolly with a better frame and parts. I guess the steppers I have would only work with a rotary tool CNC, which I'm not sure I would find very useful. A router based CNC would be more like what I could use, but could use little of the old printer.
If anyone has any suggestions, I would love to discuss them.
Sells Mendel and Prusa i3 Mk3 Kit built and working great.
Things not 3DP related:
Blog
YouTube
SketchUp Models
Top

Maybe you could use the parts to build an i3 ...
Top

An i3 or dolly is a good choice, reuses most parts, and frees up the Z axis.

I would pitch a SmartRap mini, cause I re-cadded most of the parts....but you have little parts reuse, its works best with a e3dv6 hotend and bowden setup.
Top

Thanks to you both, I'll look into the SmartRap Mini. Please let me know when you have the CADs available.
Sells Mendel and Prusa i3 Mk3 Kit built and working great.
Things not 3DP related:
Blog
YouTube
SketchUp Models
Top

Users browsing this forum: No registered users and 2 guests