Getting rid of endstops

Getting rid of endstops

by Tomasz Stawarz
Hi,
any idea how to get rid of end stops? I'm thinking about Prusa i3 MK3, and Cetus3D - they don't have end stops, so there is a way to compare current or whatever from stepper motors and to use it for "end stopping"

Have anyone of you done something like that, would you trust that solution or maybe it is better to stick with end stops and avoid risk of bending printer frame?
THX in advance for any answers

by Aziraphale
The Prusa i3 Mk3 does this by proper use of Trinamic TMC2xxx (TMC2160, is it?) stepper motor drivers, which are able to report back to the host controller the amount of current going through each motor. When a motor is unable to move (such as when the axis is at the end of its travel), the current to the motor in question will increase (I think; certainly if you stall a regular DC motor the current increases) and the controller can detect that, immediately stop the motor trying to move, and consider that to be the end of the axis. They use the same trick to detect shifted layers and blocked nozzles.

This is only possible with the Trinamic drivers (i.e. not the Allegro drivers nor the TI drivers that are extremely cheaply available), and only when the drivers are connected to the microcontroller via SPI (a relatively fast, low-level hardware communications protocol) in addition to the standard step and direction lines. The "silentStepStick" modules that you can buy to plug into a regular RAMPS board don't expose the SPI pins, and the RAMPS doesn't have anywhere for the Trinamic drivers' SPI pins to be connected anyway. As such, you need a board that has the Trinamic drivers soldered onto the board itself. That means not RAMPS. I imagine the TRAMS board can do it, as that's a board made by Trinamic themselves. Did I read somewhere that the Duet can do it? Not sure. And of course the new EinsyRAMBO board can do it. Additionally, the Smoothieboard devs will be missing a trick if they don't implement endstop-less homing with the Smoothieboard v2 which is currently being worked on and will have embedded Trinamic drivers.

Homing like this should be decently-reliable. I see no reason why it wouldn't be. As long as the firmware is written correctly it should be fine

by Tomasz Stawarz
Thx Aziraphale, after your post i have checked Trinamic site and this feature that Prusa i using for endstopless operation is stallGuard2™. I'm going to use Duet Wi-Fi so this feature is available (like theoretically) on hardware side, and as far as I was able to check will be available for testing in software. Downside of this feature is that it works only in some low-mid range of stepper motor speed so I will probably have to use endstops anyway. Will see.
Again thx!

by lowfat
Does the Duet Wifi actually use the feature? The last time I looked in to it, it didn't. Doesn't detect layer shifts either IIRC. I know smoothie can detect a layer shift, but instead of adjusting, it just shuts off the printer.

As for the Smoothie V2, I'd honestly be surprised if it ever comes out. Development on smoothie seems to have stopped. There hasn't need any firmware updates in 4 months, even on the Edge branch. Updates use to come out every few days. Shame since I think Smoothie is awesome.

lowfat wrote: ↑
Mon Oct 09, 2017 5:47 pm
Does the Duet Wifi actually use the feature? The last time I looked in to it, it didn't. Doesn't detect layer shifts either IIRC. I know smoothie can detect a layer shift, but instead of adjusting, it just shuts off the printer.

As for the Smoothie V2, I'd honestly be surprised if it ever comes out. Development on smoothie seems to have stopped. There hasn't need any firmware updates in 4 months, even on the Edge branch. Updates use to come out every few days. Shame since I think Smoothie is awesome.

They still working on Smoothie 2. 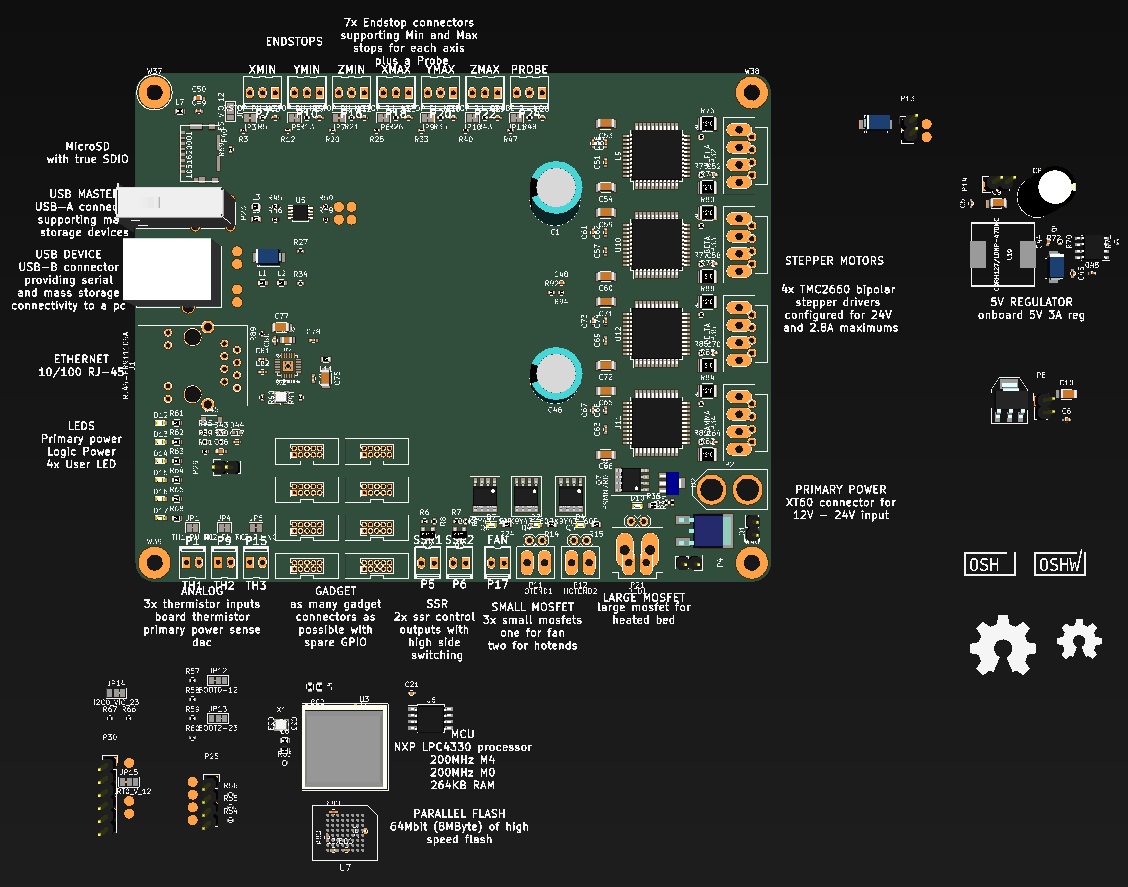 by Tomasz Stawarz
Duet does not use it, but it is capable to do this on hardware side. And it has been discussed to implement this feature in future firmware upgrades.

by megamaking
with the firmware development pace and arrogance of the smoothie devs, they are going to be irrelevant very soon. More so after Marlin has finished porting to 32bit platforms and move on to version 2.0.

by lowfat
Shame smoothie doesn't have more devs working on it. Other boards config file seem archaic in comparison.

by PRZ
I have removed home switches on machines with boards having software adjustable current and drivers with no specific function (Duet 0.6 and Duet 0.8.5 - drivers A49xx) by stalling the steppers with reduced current. but there are some restrictions:
- It may not be workable without software trimpots
- It is not very precise, so this work only if the homing is followed by an automatic calibration (I made macros for that and there is no time used as this is done during the bed heating phase)
- The minimal current set for stalling the steppers shall not be too low as it drive to high rebounds - I assume that if there is no sufficient torque, the stepper got problems to "re-hook". I experimentally found that the minimum current was around 40% of the stepper nominal current. It helps to have some dampening material on the endstops (felt).
- Your machine and mechanical end stops shall be reasonably sturdy to limit deformation when steppers push on the endstops. See above paragraph as 40% current when static gives significant forces.
A macro for a delta can be found here : http://reprap.org/wiki/RepRap_Firmware_ ... d_switches

[edit]
I use deltas so need home up on all three columns, but for a cartesian machine, you don't care about X/Y homing precision, and you can directly home Z with a bed sensor (not on all softwares), which may be faster as you don't have to go up then down.
All times are UTC+02:00
Page 1 of 1
Powered by phpBB® Forum Software © phpBB Limited
https://www.phpbb.com/